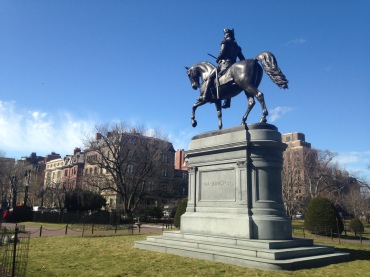 The Boston Common’s statue of Washington

As this was my first time returning to the States since arriving in France last August, I tried to figure out how to “bring France back home” with me. However, no matter how much wonderful cheese, expensive chocolates, savory jams, or mustards you manage to sneak through customs, France is in the experiences, not the flavors. Bringing it anywhere is impossible. Thankfully, my family forgave my inability to pack up the country of France into a rolling suitcase and I think I may have convinced them (and perhaps you as well?) that the only thing to do is to visit me across the pond.

After recovering from jetlag at home in southern Maine, I travelled to Boston for the privilege of working on the Aeolian-Skinner organ at the Church of the Advent and to enjoy some good ‘ole New England (and not-so New England) food (I highly recommend the prosciutto and fig pizza at Figs on Charles Street).

It was certainly nothing short of a thrill to return to play this instrument… and I think I finally got the hang of the curved pedalboard and pistons! 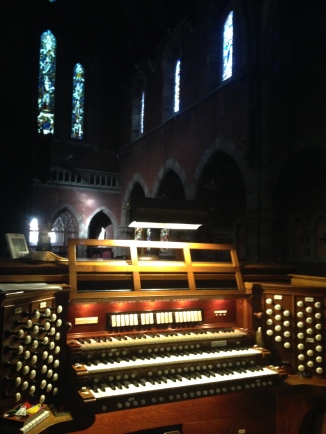 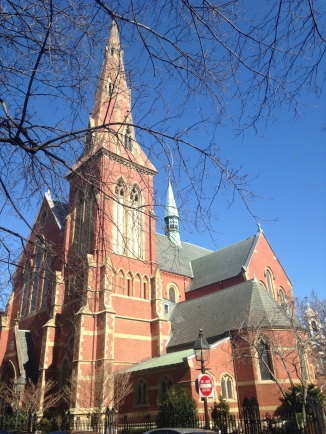 The Church of the Advent

Another highlight was being able to sit in the “driver’s seat” of another Aeolian-Skinner in the city of Boston. I’ll be presenting a recital for the American Institute of Organbuilders’ Convention this August on the 4-manual, 233-rank Opus 1203 at the Christian Science Mother Church. It will be such a pleasure, and a satisfying challenge, to showcase the 151 stops of this mammoth organ in a 40-minute recital! 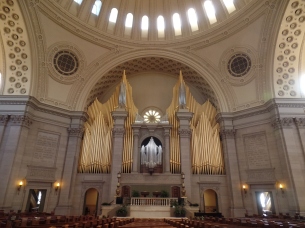 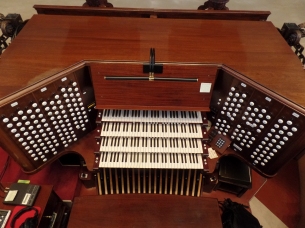 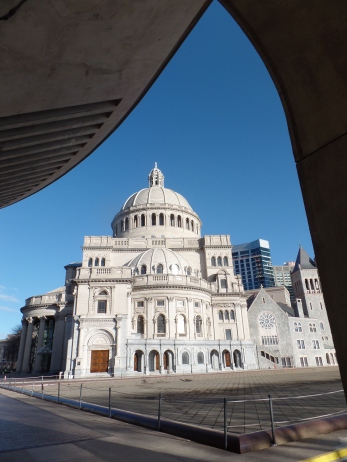 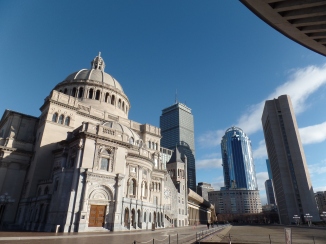 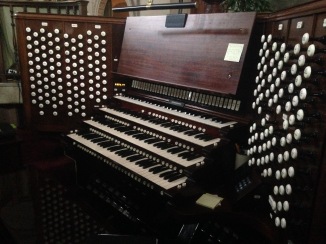 Because I’ve now become addicted to crossing international borders, I headed up to Montréal for an overnight in order to visit and to have a lesson with the excellent organ professor at McGill, Hans-Ola Ericsson. After the 50° weather in Toulouse and the unseasonably mild weather in Boston,  the sudden drop to 10°, accompanied by its requisite wind, was a bit of a shock. After my time in France, I suddenly noticed the many boulangeries ornamenting Montréal’s street corners. I also realized how little I could understand the Québécois French. (Note to self: one asks for the facture and not the addition when trying to receive the restaurant bill.)

I did have great fun telling the border control agent that, yes, my address is in Maine but I’m currently living in France and was travelling to Montréal for 24 hours to have a lesson on the pipe organ with a professor whose school I do not attend (honesty is the best policy, even [or especially] when it’s not concise?). I do love the curiosity that people express upon learning about what I’m fortunate enough to be doing with my life and career. Who knows – maybe I’ll see that officer at a concert one day!

Between lunch with my grandmother and visits with friends, I made it to the Noack Organ Company’s shop, where I was tested on my knowledge of organ building and ability to quickly memorize names. Thankfully, there were no grades for either of these pop quizzes! I enjoyed seeing the several instruments-in-progress and the two practice organs currently occupying space in the shop in this beautiful part of Massachusetts.

Now, I’m merely hoping for smooth flying and flight connections as I travel from Boston through Paris to Toulouse. I only had a slight moment of panic upon being reminded to bring my visa, which still hasn’t been validated by the French Office of Immigration, despite me sending in my paperwork to do so in October. Fulbright reassures me that the letter of confirmation from OFII office affirming that they received my paperwork is sufficient for reentry, but I still have my fingers crossed for another kind customs officer!

Some obvious and some not-so obvious things I (re-)noticed upon returning to this side of the Atlantic:

-French pharmacies, which are solely for medical purposes (not for various cravings for Skittles or colored pencils), are really quite incredible, both for the assistance of the pharmacists and the for the costs of medications.

-Buying fruits, vegetables, and foods in season really is not in the forefront of the American culinary mind.

-Again, pharmaceutical differences: the sheer amount of advertisements on the television and on billboards for medications (advertised to the consumer) is very striking.

-Driving after not doing so for six months was a bit more exciting than other drivers on the road would likely have appreciated.

-It is very strange to suddenly hear everybody speaking in English. Not only did my mind want to tune into every conversation (since ambient English conversations in Toulouse are so rare), everything simply seemed louder.

-When my brother asked me to pick up some pods from the Nespresso shop (since I was drinking all of his due to my newfound espresso addiction), I began planning how to ask for what I wanted in French, before realizing that I was indeed capable of going to the store and not planning what I was going to say in advance.

-Knowing that you can always stop for groceries (or anything, really – because there is always someplace that is open 24/7) is such a comforting feeling.

-I was not mentally prepared to get carded when buying Godiva liquor for a French friend.

-The French system of having tax and tip already factored into all bills is just wonderful, since it allows you to have correct change counted out even before you arrive at the counter, instead of scrambling to find $1.29 more.

-When you see somebody in the States who you last saw in France, with whom you a fait la bise (of course) there is always an awkward moment where you both wonder whether to do so again, to hug, or to shake hands.

-After calling the first floor above ground level the “1st floor” for six months, suddenly calling it the “2nd floor” leads for confusion.

-Please explain to me why we have these pesky $1 bills and why there are no $2 coins.

-My first two evenings eating out both featured a moment of hesitation during which I realized that the American Appetizer is the French Entrée and the American Entree is the French Plat (yes, it took two times before it finally settled).

-There is sugar in everything and I can now detect it by tasting it. EVERYTHING is sweet.

-My taste buds will never let me go back to drinking skim milk. 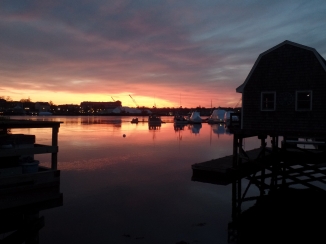 Portsmouth, New Hampshire pulled out the red carpet sunset during one of my last evenings in town. 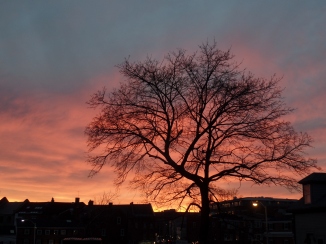