Something of which we all dream — or, at least, of which those of us with a penchant for travel and curiosity about immersing ourselves in other cultures dream. Somehow, I was born with the travel bug, and haven’t yet gotten bored of the myriad of unique places and experiences this world has to offer (to my ever-suffering parents’ entertainment).

And that’s where this blog restarts.

Two years ago, I had returned to the USA after a year studying at the Conservatoire à Rayonnement Régional de Toulouse in France with the aid of a Fulbright Scholarship. I couldn’t believe the incredible place to which I was moving back: Boston, Massachusetts, to work as Associate Organist & Choirmaster at the Church of the Advent. If there was anywhere to which I could move back after a year in the breathtaking and historic south of France without feeling drastic culture shock, it was here. When asked the equivalent question of “what do you want to do when you ‘grow up,'” I first replied that I have, to my chagrin, been of the same short stature for the last 10 years so that is unlikely to change, and that I was doing one of the things I had always dreamed of doing: balancing a tripartite career of glorious church music, performing, and teaching.

70+ concerts, nearly two hundred church services, and countless flights later, I am establishing a new base, now on the opposite side of the Atlantic: Stuttgart, Germany. Unfortunately, pursuing a Master’s degree (with the aid of a DAAD Scholarship) nearly 4,000 miles and a big pond away from Boston necessitated retiring from that dream position. Mixed feelings were the rule, not the exception… but when when I won the scholarship, it felt like a thumb print signaling that now is the time to pursue both this degree and more European exploration, not “then” (whenever then would have been).

While much of this blog will be devoted to organs, music, and food, there first comes the necessary bureaucracy… which is also a part of cultural immersion! My first experiences in receiving a student visa were in moving to France in 2015. I applied for it in Boston, receiving my passport back weeks before the transatlantic move, and needed to simply verify the visa and have a health check when I finally arrived in Toulouse. The more complicated processes were opening a bank account and signing up for the Conservatoire – but, having been thoroughly overeducated in the French language through a French Bachelors degree, I felt a few modicums of comfort when facing various bureaucrats who wished to get me out the door as quickly as possible.

Germany? It’s an entirely new ballgame, especially given that my studies in this beautiful and grammatically befuddling language have been limited to a stack of German grammar books and watching German movies with subtitles. Was – am! – I ever in for a challenge. 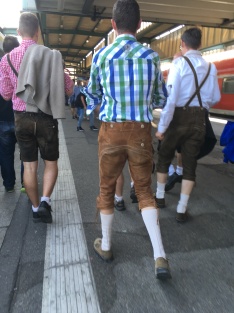 It was Volksfest here when I arrived – the Oktoberfest is only in Bavaria, and this is the Stuttgart region’s response to it. Of course, unashamed Lederhosen wearing is requisite. 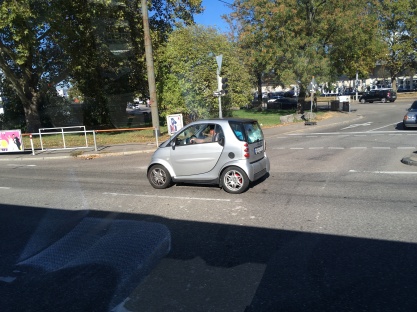 The cars are often so TINY

The USA, Australia, Canada, Israel, Japan, and New Zealand are all countries from which one does not need to apply for a visa before entering Germany. In fact, one almost definitely has to apply once they are within the country (entering on a tourist visa). I’m not sure why, but this gives a person — me, in this case — 90 days after arriving to compile all the necessary paperwork for a visa application, and begin the visa process.

What is required for a visa, one might ask? Naturally, that depends and frankly, I’m still not totally sure. I needed: passport, passport photographs (biometric), an Meldebestätigung (more on that below), proof of income (minimum 720€/month), proof of attending the Musikhochschule or University (more below), and proof of health insurance. I did not need to prove my knowledge of German, although that may have drawn a large quantity of guffaws out of the immigration office employee, and the 50€-110€ fee was waived because the German government wants their scholarship recipients here. The DAAD benefits never end!

A Meldebestätigung is a proof of residence. Every time one moves somewhere in Germany, they must go to the local administration office (here it’s the Bezirksamt) to register their address. While the officer notes your information, they also ask your religion, something that leaves most Americans with a raised eyebrow or two – and something distinctly odd in a notoriously non-religious state. Here in Germany, there is a Church Tax (Kirchensteuer) where, when one registers as either Catholic or Protestant (Lutheran), a percentage of their income also goes to that church. This has been law since the last century, and these incomes comprise almost three quarters of church revenues. Here in Baden-Württenberg, the tax is 8% of paid income tax. My landlord’s reply when I registered as Anglican? “Oh, you are lucky! You do not have to pay the tax!”

For German universities and schools of music, the timing of the application process is far removed from that of most of North America. There are two semesters: Wintersemester and Somersemester. For further confusion, the winter semester begins in October and runs until February, while the summer semester runs from March until August. Applications for the winter semester that I’ve just begun were open from March-April. For the summer semester, they are open now – so don’t hesitate on that application! Auditions for the current winter semester took place in June… and because of my scholarship status, I was allowed to wait until I arrived in October in order to take a pro forma audition (thankfully pro forma – packing up my suitcases again would have made for a very unhappy Katelyn). However, this meant that I did not have an acceptance letter until the audition was finished.

Classes “began” 7 October. My audition was 9 October. You might see the irony…

I received my acceptance letter on 10 October, the day after my audition. 11-12 October, I was in Bonn for an orientation seminar for the DAAD, where I garnered a lot of information, the most immediately relevant being that everybody is equally confused about their own immigration status, and not knowing what’s going on is absolutely fine. The best part of the weekend was meeting folks from around the world whose fields of interest varied from 12th century Gregorian chant to ecological studies on scorpions to environmental studies of renewable energy. On our CVs, we had nothing in common besides this scholarship, but the shared passionate curiosity in everything made a basis for endless conversation.

One thing was sure: nobody knew exactly how getting a residence permit was done. Some had a card that looks like a US green card, some had had to wait months to receive their permit, some had needed appointments with the immigration office, and some had just showed up and waited in line.

As someone who likes to plan for everything, I both emailed the Stuttgart   Ausländerbehörde (immigration office) for an appointment, and prepared to show up and wait in line on Monday morning – yesterday! The office opened at 8:30, and I showed up with a book at 7:45. Nothing like a little reading about the Hamburg organ school before adequate coffee consumption has happened (I wear my nerd status proudly, thank you). There were signs everywhere that an appointment was “basically required” (Grundsätzlich nur mit Terminvereinbarung), so I had little hope. 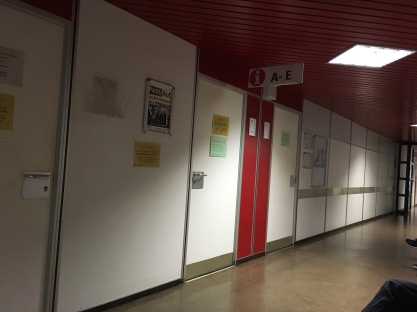 Different rooms for last names that begin with different letters. But nobody knows that lies behind the doors until you’re allowed to enter… 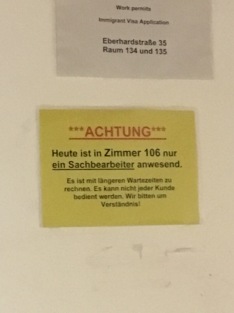 Translation: Attention! Today in Room 106 only one clerk is present. Longer waits than usual are expected. We cannot serve all customers. Thank you for your understanding!

I had the permit 20 minutes after they opened. They accepted my paperwork, gave me an application I didn’t know I’d have to fill out, and called me back in after they had entered my information in their system. Oddly, all the online sources say that, since 2011, Germany no longer puts sticker permits into passports. Several of my DAAD colleagues had these nifty cards that proved their residency. However, my passport, which features a shiny sticker of its own, dated 15 October 2018, begs to differ. Instead of having to wait weeks to do a background check, the DAAD had done all the leg work – I could walk away that day and not return until next year.

Or so I thought. That afternoon, when I was already feeling the weight of stress lifting, I got an email letting me know that I had forgotten to sign something and needed to return (I suppose it’s not their responsibility to tell me all the things to sign, no…). So, this morning, I returned, walked in, was shown two papers I had never before seen in my life (promising to return to the office if I spent more than 6 months out of Germany during my time with the residence permit, and promising to chat with them if I changed majors), and walked away a woman fully permitted to reside in Germany.

Next is the adventure to actually matriculate to the Musikhochschule, but I think that is for another day; the sun is shining and some non-bureaucratic adventures await. So bear with me while I get this blog restarted, and come along to enjoy the fun! 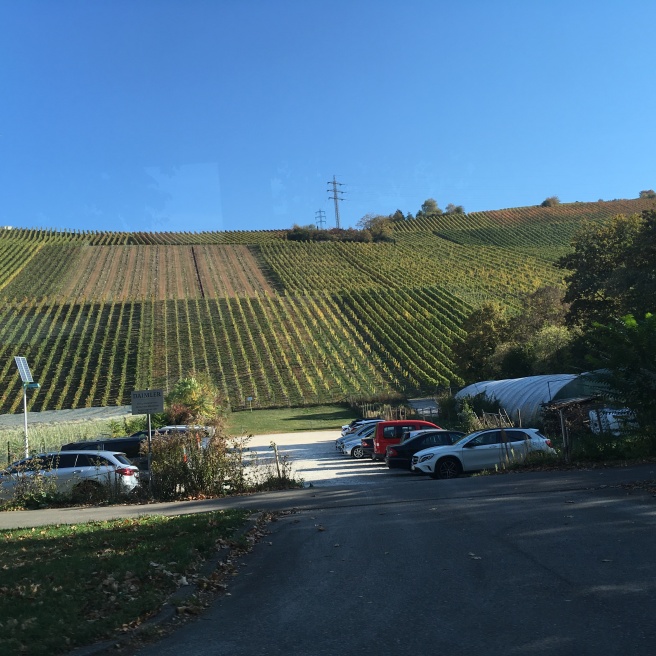 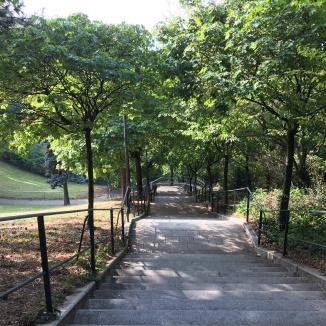 Stuttgart is quite the hilly city; nestled in a valley between vineyards, it can be quite breathtaking. 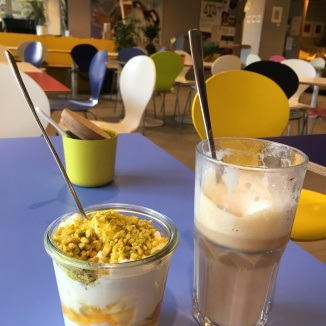